The small village of Pasu blew us away and might very well be the most beautiful place we have ever seen, hugging the fast flowing Hunza river that cuts through the valley, with some of the most terrifying suspension bridges to carry you across, on the backdrop of the Batura glacier and the surrounding +6000 meter snow covered mountain peaks. Walking through the village, comprised of small squared houses, built with the many surrounding grey-colored rocks, passing orchards with apple and apricot trees with deep yellow, orange and red autumn colored leaves, while misty clouds of dust were being blown up over the Hunza river beds, we felt as if we had entered a real life high resolution picture book. Everywhere we looked, we saw another beautiful scene we could stare at for minutes in amazement.

We found a nice little guesthouse from where we could explore the surrounding area. Venturing out on the suspension bridges with the strong winds gusting around our heads was more terrifying than we had anticipated. The distance between the wooden planks we were walking on was big enough to force us to continuously watch our step, looking down into the fast flowing river about 20 meters below us. While we were holding on tight for our dear lives, half cramped, with our palms sweaty and our heart beats racing, a little old grandmother came strolling past, holding a bucket in one hand, while lightly following one of the cables in the other. We couldn’t help but laugh, though we kept to our steady slow space to make sure we would make it safely across.

It’s hard to describe the beauty of the surroundings, but we captured some of it in a small video you’ll find in our film section. When we made it back across the river to the other side, we met a few young local guys in the village Hussaini. They were curious to learn where we were from. Where Jeroen’s answer “Holland” barely raised an eyebrow, their eyes lit up when they heard Linda say “Germany”. “We love German people”, they cried, “they are very strong and courageous”. We joked that if they had seen us out on the suspension bridges, they would think otherwise.

As it turned out, the Uyghur weren’t the only ones to share a deep love for Hitler (see our previous blog entries), these fellows were rather fond of the genocidal guy as well. For the record, we came across Hitler affections in Kazakhstan and Mongolia too, but the Hussaini guys were almost religious about it. They seemed unhappy about the direction Pakistan is heading in and cherished ideas about violent revolution, to which we tried to convince them that non-violent resistance would help them and their country a hell of a lot more.

It left us with a sour taste in our mouths, wondering how three young men could get such destructive thoughts in their heads. It does show that Pakistan is not in the best of shapes. There are continuous attacks in Baluchistan in the southwest on the border with Iran, it’s not much better in the tribal belt on the western border with Afghanistan and in the east the country has fought several wars with India since independence, with a continuing fight over the Kashmir region in the north and far too frequent bomb blasts in various cities across the country as a result. Pakistan really only has good relations with China, which is investing heavily in Pakistan’s infrastructure, to create a direct seaport for western China to connect with the Indian Ocean. It remains to be seen how much the Pakistani will benefit from these investments, but with the blatant omnipresent corruption in the country, it’s likely that most of the gains will flow into the pockets of the wealthy few.

Pondering these thoughts, we continued our trek up the mountain to Borit Lake and on towards the Batura glacier. After 5 or 6 hours of walking, our tired and sweaty bodies probably didn’t agree so much with the cold wind piercing through our jackets and as the temperature and our energy levels started to drop we were happy to finally be able to make our way back down to Pasu. Though not before a group of journalist stopped us in our tracks (they were making specials on climate change and tourism in the Hunza region): whether we wanted to do a quick interview. Linda made the cut and appeared with her interview on Al Jazeera, but Jeroen lost out to the exuberant enthusiasm of an over-the-top American tourist… 😉 You can find the clip in our Pasu video!

By now, Jeroen’s energy had completely run out and as he started to feel pains in his chest, we decided to hitch a ride for the last kilometer back to our guesthouse where Jeroen experienced a rather rough night. First thing the following morning, we took a taxi to the nearest hospital in Aliabad where Jeroen was diagnosed with pleuritis. The hospital was in a much better condition than the hospital we had been to in Novosibirsk in Russia, which really tells you more about Russia than Pakistan.

We were in luck, the manager of a hotel in the neighboring town Karimabad happened to be in the hospital as well. He told us that (under light pressure from the doctor) he would make us a good deal and drove us to the hotel in his little minivan. We took it easy for a few days, enjoying the wonderful dal (lentils) and mixed vegetable curries with chapati (flat bread), looking out on the spectacular Hunza valley. As Jeroen’s energy came back, we started exploring more of the surroundings and visited the Baltit and Altit forts (dating back 700 to 1100 years), though we spent most of our time in a tiny little wooden shack, where Lal Shezadi managed her own mini-restaurant with the most amazing local dishes. Apart from the excellent food, the place got most of its traction from the brutally honest owner, who loved to speak her mind about her customers, especially in their immediate presence. We were in luck, she seemed to like people from Europe, but many of the Pakistani had to endure her thorn. They all took it in good fun though and we had many great conversations with them while waiting for our food, making it the highlight of our stay in Karimabad. Lal Shezadi even invited us into her cozy little home for the celebration of her childrens’ birthdays.

The area is rich in apricot and apple trees, the latter of which were hanging full with fresh fruits. So when we were wandering around Karimabad, we were often given apples from the peoples’ own gardens as we were passing by. It’s also a relatively liberal and progressive town, where women are allowed to work and able to walk around without a headscarf, with a literacy rate higher than 95% (compared to 55-60% in the rest of Pakistan). Tourism probably played its part, though a lot is also influenced by their religion. There was a sharp contrast in development and education between Karimabad (with a majority of Ismaili Muslims) on one side of the river and Nagar (with a majority of Sunni Muslims) on the other side. The Ismaili follow the Aga Khan, who advocates educating girls before boys, as the women typically stay at home with the kids and are therefore the ones educating their own children, and is a lot more progressive in general than the more conservative spiritual Sunni leaders.
Besides all these political predicaments, there was also plenty of opportunity for socializing. Even though foreign tourism plummeted after 9/11, the Hunza Valley still hosts the occasional over landers, backpackers ánd an increasing amount of domestic tourists. And so we would end up standing on a rooftop at night, sharing stories and a bottle of wine with a mixed group of foreigners and Pakistani, thinking why the hell we can’t all simply get along… 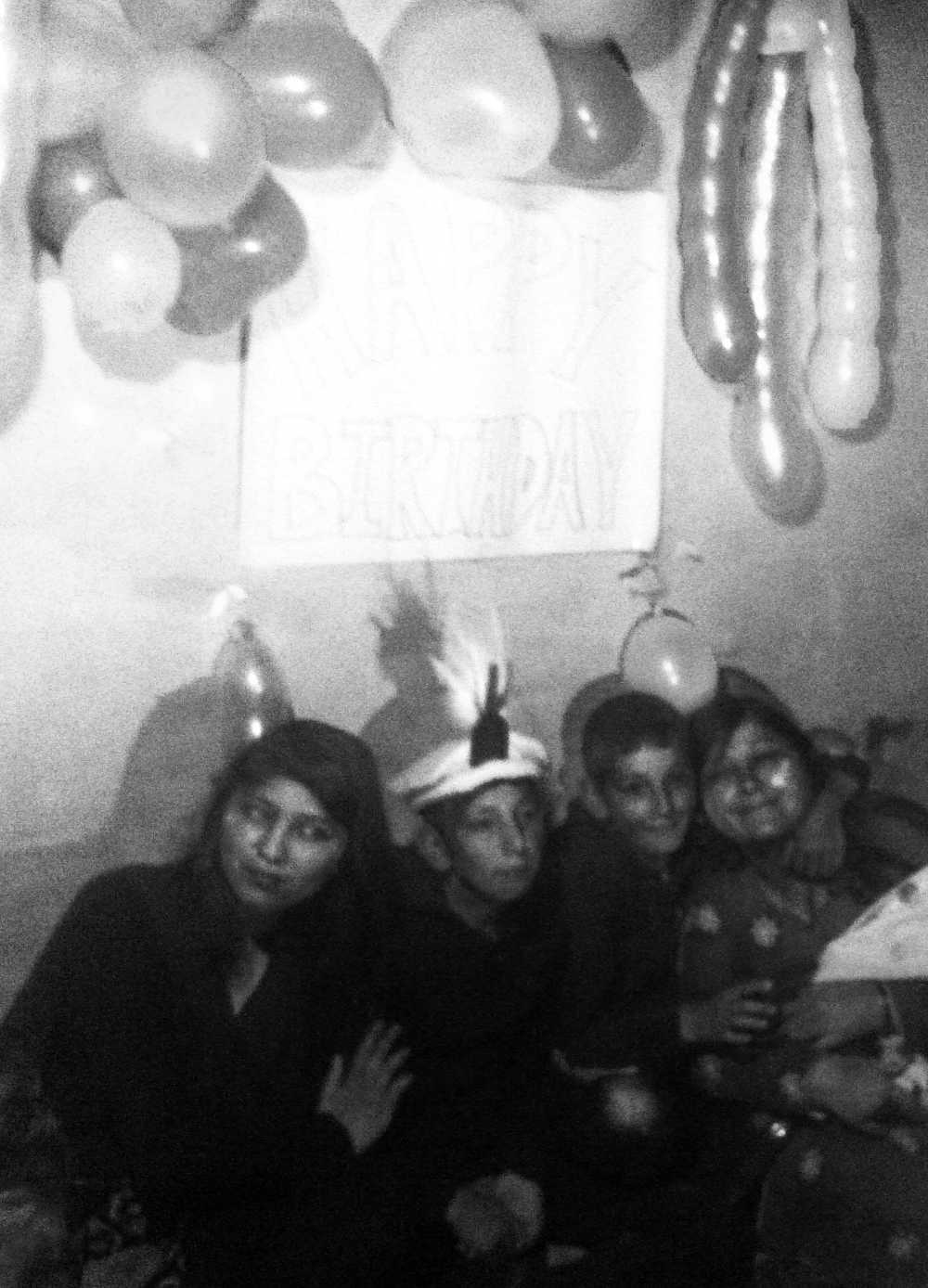 Lal and her children